Today was a day of stark contrast, one that I wasn’t expecting. We began the day with a bus ride toward Bethlehem, the birthplace of Jesus Christ. At an overlook near the city, we stopped to get the lay of the land. A valley lay beneath us with two mountains in the distance. Side by side sit Herodium and Bethlehem. Herodium was a large fortress for King Herod completed nearly two decades before Christ’s birth. It was several stories deep and mounded with dirt on the sides, making it look like a mountain that has been cut off. Bethlehem, to its right, is a town, full of life.

We then ventured through the wall (I’ll talk more about that below) into the city and visited the International Nativity Museum. This is a French-run museum that collects and displays nativities from all over the world that reflect their own cultural understanding of the birth of Jesus. It was a joy to walk through and see them all. There was such diversity. My favorites were the ones that expressed more than the stoic emotions of the moment. 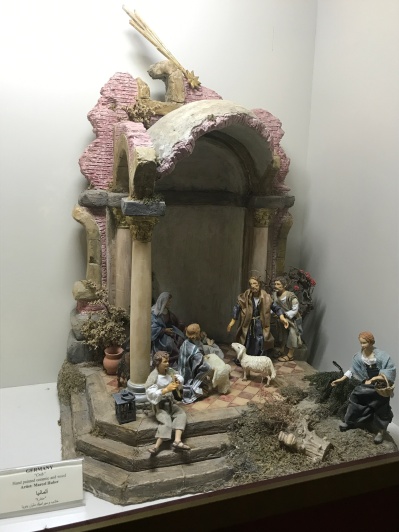 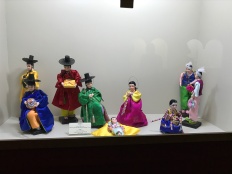 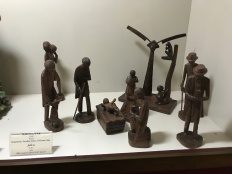 We then enjoyed a traditional Palestinian lunch of pita, hummus, fresh vegetables, and falafel. I had no idea with falafel was, but others in our group who have eaten it before said it was fantastic. It was so fantastic, I ate three. 🙂 The restaurant was a tiny storefront with street-side falafel cooking. However, when we walked inside, the room opened up to reveal a large dining area.

Following lunch, we walked toward Manger Square and entered the Church of the Nativity. Floor mosaics in the church date to the 4th century when Constantine’s mother, Helena, built a church over the cave where Jesus had reportedly been born. The church has survived two rounds of destruction. First, the Persians invaded, but chose to leave the church because there were depictions of Persian Magi in the mosaics. Later, the Muslims destroyed all the churches in the area, but spared this one because Christians had invited local Muslims to use the church for daily prayer. The holy building remains standing as a testament to religious cooperation and compassion.

Fortunately, very few people were there giving us quick and easy access. It is being refurbished, so there were lots of scaffolds in the way of the vivid mosaics and column paintings. We did catch a few glimpses. The original 4th century floor is displayed through a wooden door and is remarkably excellent condition. The grotto where the birth took place had an air of excitement and reverence in it.

This church is also the location of St. Jerome’s life-long work of translating the Hebrew Old Testament into Latin. Commissioned in 382, the project was not completed until 405. We gathered in the courtyard outside of his commemorate chapel at the foot of his statue and sang “Ancient Words” together. An Asian group passed by and few joined in with us. When we concluded our singing, one lady said, “Alleluia!” It was a spirit-filled, beautiful moment!

The Grotto where Jesus was born 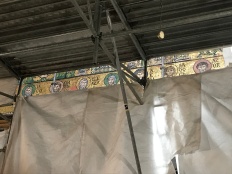 A glimpse of the saints

Only the penitent will pass

Following a morning celebrating the birth of Jesus Christ, the mood shifted. We were going to face the wall and examine protest art. The wall is slated to be over 700km long, sometimes concrete and sometimes fence with barbed wire. Palestinians must meet a list of requirements to cross it and most don’t. They are trapped in the West Bank and Israel is drastically reducing their water supply. The anonymous British-based graffiti artist Banksy has opened a hotel directly beside the wall, called The Walled Off. He encourages protest art on the wall and has done some himself. Here is a sample of the art of protest: 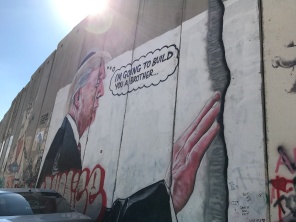 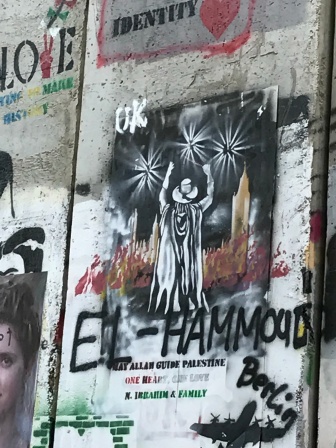 Admittedly, I don’t understand the political situation that brought the people of this region to this place in history, but I can say that my heart breaks for these families. It was a rough day to see the stark contrast between the joy the birth of the savior brings and the sadness the birth of the occupation brings.

Tomorrow, we travel into the heart of the West Bank to visit Nablas, or ancient Shechem, where Jacob’s well is. It was here that Jesus spoke to the Samaritan woman and began to shift Jewish and Samaritan social norms. The land I saw today is in need of such a change again!

3 thoughts on “A Day in Bethlehem”

at FUMC PearlandSeptember 2, 2022
Join me at FUMC Pearland in Pearland, TX and let's praise the Lord together! Or join online through FB or https://fumcpearland.org/live